If you’ve been looking for fun and unique facts and information regarding the Russian Tortoise, then you’ve come to the right place.

The Russian tortoise (Testudo horsfieldii), also known as the Horsefield tortoise, Central Asian tortoise, Afghan tortoise, Steppe tortoise and Four Clawed tortoise, originates from the Mediterranean region and have become one of the most popular breeds for domestication.

The Russian tortoise is one of five tortoises in the Testudo genus, which also includes:

Some of these tortoises are also known by different names: the Greek tortoise is also known as the Spur-thighed tortoise, and Kleinmann’s tortoise also goes by Egyptian tortoise. Furthermore, there are several subspecies within the Greek tortoise, such as Maghreb tortoise (T.g. graeca), Greek tortoise (T. g. ibera), and Persian tortoise (T.g.zarudnyi). The Testudo genus has undergone many revisions since its inception and still is being updated occasionally. Because of this, there are some peculiarities within the information, depending on the opinion of the taxonomist you speak to, such as the Russian tortoise actually belonging to the genus Agrionemys. For our purposes, it is still acceptable to refer to the Russian tortoise in the genus Testudo. 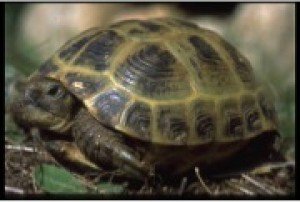 The natural habitat of the Russian tortoise is quite varied, including dry steppes and deserts as well as lush areas of grass and vegetation. The tortoises can be found in Iran, China, Russia and Pakistan. In areas that experience colder climates, the Russian tortoise will burrow and hibernate to wait out the extreme weather. One consistent trait of the habitat is a dry climate. Tortoises as a whole can be separated into two categories: tropical and Mediterranean. While the tropical tortoises can thrive in areas with humidity and moisture, Mediterranean tortoises, such as the Russian tortoise, can be affected negatively. Too much moisture in the air can affect the respiratory system of a Mediterranean tortoise, and wet ground can affect the bottom of the shell.

Due to their popularity in places such as USA, the UK, and Asia, the exportation and international trade of the Russian tortoise over the last several decades has increased to the point where millions of tortoises have crossed borders to live their lives as pets. Because of this increase in international trade, laws were created to monitor the exportation of Russian tortoises. In response, many countries now breed their own Russian Tortoises in captivity. This has an overall positive effect on the tortoises, which experience an increase in health and survival as compared to their imported counterparts. This is also positive for the wild tortoises in the Mediterranean which escape capture and exportation.

The appearance of the Russian tortoise varies, but they are usually greenish-brown with a flat and round shape. They can grow up to 28 cm (11 in).

Females tend to grow larger than males, but to distinguish genders, one need only look at their tail- males have longer tails that usually curl, while females have shorter, wide tails. 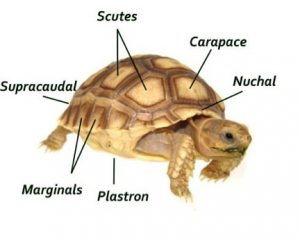 To review the anatomy of the tortoise, it is helpful to know the following vocabulary:

Carapace: all the individual plates, which is all of the upper part of the shell

Plastron: This is the lower undercarage of the shell

Scutes: the individual plates of the shell, found on the carapace

Marginals: the first layer of scutes at the base of the carapace

Supracaudal: the scute directly above the tail

Nuchal: the scute directly above the neck

admin
Search Website
Russian-Tortoise.com is a participant in the Amazon Services LLC Associates Program, an affiliate advertising program designed to provide a means for sites to earn advertising fees by advertising and linking to Amazon.com and Amazon.co.uk.
Contact
Russian Tortoise Care Center